Hi has any one ripped this movie i wanna have it 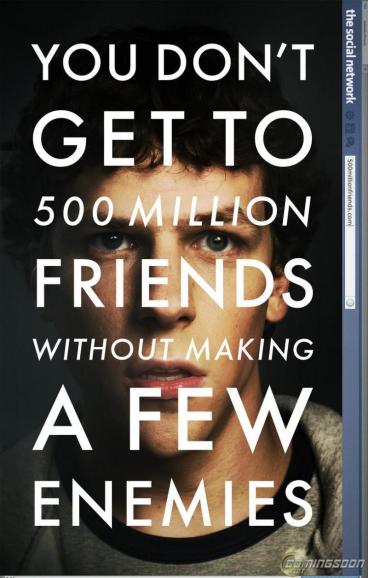 When word leaked out that Aaron Sorkin was writing The Social Network movie, a movie about Facebook, I did all I could to pretend that this was not happening. And now that David Fincher is in this particular project, I feel that I could no longer hit my “ignore” button.

This is a story about two friends – one a computer genius, the other a business expert – who began a website that became the fastest growing phenomenon in internet history. Three years later, one was suing the other for 600 million dollars (or 1/30th of Mark Zuckerberg’s worth). It’s a story about greed, about obsession, about our belief that all the money in the world can make us happy. But it’s also unpredictable, funny, touching, and sad. It gives us that rare glimpse into the improbable world of mega-success.

The Facebook movie starts out in a campus bar with a young couple. The guy is Mark Zuckerberg, a slightly cooler Bill Gates. The girl is Erica, his girlfriend. The two are having a conversation. Actually, they’re having five conversations because Mark can’t focus on one thing. He’ll occasionally backtrack into a previous conversation within the flow of the current conversation, all while preparing for the next conversation. He’s clearly smart as hell, but the habit makes him incredibly annoying. Add a side of selfishness and an order of condescension and we can see why Erica becomes more frustrated the longer the conversation continues. Mark is so into his own problems, in fact, that he’s completely blindsided when Erica breaks up with him.

social netwok movieConvincing himself that he could care less, Mark heads back to his Harvard dorm to do what any computer nerd does when he gets dumped by a girl he never should’ve landed in the first place. He starts blogging about it! “Blah blah blah, Erica’s the biggest bitch whore in the world…” But the dumping ignites Mark’s imagination and he comes up with an idea for a website – a sort of “Hot or Not” which allows Harvard guys to compare Harvard women against each other. His best friend Eduardo pops in to help him and they have the site live in less than an hour. Within half an hour after that, the site is so popular, it takes down the entire Harvard computer network. Though he manages to piss off a number of faculty (and Harvard women too), Mark earns some ivy league street creed and makes a name for himself (not easy to do on the hallowed Harvard grounds).

The stunt also brings Mark to the attention of Cameron and Tyler: two extremely rich and handsome brothers who are star members of the Harvard row team. Impressed by his creativity and speed, they want him to code their new website – an exclusive Harvard “Myspace-like” network. Mark digs the idea and agrees to help. Over the next month, however, he starts dreaming up his own variation of the site: a social networking experience built on exclusivity. His site would work like real life. Someone could only know your personal details if they were friends with you (unlike Myspace which at the time let anybody know anything about anyone). An exclusive network of friends. He called it “TheFacebook.”

He and his best friend Eduardo come up with the plan – Mark is geek patrol and glues his fingers to the keyboard, Eduardo is business-central and plots the site’s future. The coding wizard needs less than a month to build the site. It goes live a few days later and takes off like a Malibu brush fire. Within weeks everyone at Harvard’s using it. Cameron and Tyler, still in the dark about Mark’s secondary endeavor, are eagerly awaiting their website code. Imagine their surprise when “TheFacebook” shows up on every desktop in school. They demand Mark shut down the site but Mark’s already onto the next conversation. He expands into other Ivy league schools and continues to improve the interface. The success is both exciting and terrifying. Eduardo wants to be cautious and look for ways to monetize the site. Mark wants to grow and add more features.

It was only by chance then, that such a crucial juncture in the website’s existence fell upon the end of the school year. Eduardo had to go back to New York for an internship. Mark flew to Norcal to rub elbows with Silicon Valley. Little did either of them know that Mark was about to meet someone who would completely change the game.

Does the name Sean Parker ring any bells with you? Maybe yes, maybe no. For the record, Parker is the late nineties time capsule that blew the music industry wide open, exposing their ridiculous CD markups when he co-founded Napster. When he saw his gal pal toying around a website, “The Facebook, it’s as if his world began to change its shape from all angles. He called Mark and Eduardo immediately for a meet-up. A week alter, they met at a swanky NY restaurant arriving half an hour late. He just wanted the boys to know awesome they were. With that remark, he’s got places to be, so he’s up and gone as fast as he came, but not before casually dropping a suggestion: “Drop the “the” and just call it “Facebook.” “It’s cleaner,” Once gone, Eduardo turns to Mark. “What a douchebag,” Eduardo’s eyes say. But Mark’s googly giddy expression tells a different story.

Needless to say, Parker *did* want to crash the party. He just wanted to make sure Mark’s parents weren’t around (Eduardo) when he showed up with the keg. With Eduardo back in NY, Parker made his pitch: “What are you doing with that guy?” he demanded. “He’s holding you back.” The more Parker points out how little Eduardo is doing, the more things Mark gives Parker to do. And to Parker’s credit, he gets things done. Working for free, he takes Facebook international within three weeks. Mark eventually hires Sean without telling Eduardo, giving him a 5% stake in the company. When Eduardo finds out about the tomfoolery, he makes a bold statement and freezes the company bank account, potentially putting Facebook in major jeopardy. It’s the last straw. Mark and Parker trick Eduardo into signing a contract that screws him out of hundreds of millions of dollars, effectively firing him. In the process, a friendship is destroyed.

The script ends with a chilling and heartbreaking scene. It’s 3 years later, with Mark being sued by Eduardo, Tyler and Cameron, for the full 16 billion dollars the company is worth.

The Social Network movie is a either a modern tragedy or a modern success story depending on how you look at it. Imagine going from nothing to a billionaire in less than a year. How do you even grasp that kind of success? How do you live a normal life? How do you address the constant lawsuits that eat into your everyday existence? And how do you do this at 22 years old? When I was 22, just busy studying tons of lessons in preparation of my upcoming examinations. Either way, it’s fun to put yourself in Mark’s shoes and picture out how you’d handle the situations.