3D TVS = This brand new technology will revolutionise the way you watch films! Godzilla will literally jump out of the screen at you, Superman will fly past you, Charlie Chaplin will seem as if he’s fooling around in your living room … Oh wait, you say this stuff’s been around since the 1840s?

Sir Howard Stringer, the British chief executive of the Japanese company, said that 3D was “clearly on its way to becoming a mass market technology”.

“A variety of issues still need to be addressed, but the 3D train is on the track and Sony is ready to drive it home,” he told delegates at the IFA technology conference in Berlin.


Sir Howard said that 3D had captured the imaginations of film-makers and content creators.

Sony will launch new 3D-compatible models of its popular Bravia range of televisions next year, and Sir Howard added that he hoped other Sony devices, such as its Vaio laptops, PlayStation 3 games console and its Blu-ray high-definition DVD players, would also support 3D content in future.

3D television one of the big stories at the Consumer Electronics Show in Las Vegas earlier this year, with many manufacturers throwing their weight behind their technology. A host of companies, including LG and Samsung, outlined plans to make their own 3D television sets, while satellite broadcaster Sky has confirmed that it will launch a 3D channel next year.

The trend is being driven in part by the cinematic success of 3D movies. By the end of the year, there will be more than 7,000 digital 3D screens worldwide, while critics are already heaping praise on Avatar, the new 3D film from director James Cameron.

Sony has not indicated how much its Bravia range of 3D televisions will cost, but the price is expected to run in to thousands of pounds. Hyundai, another 3D TV manufacturer, expects its television to cost around £3,000.

The consumer electronics industry will need to settle on a common 3D standard if it is to avoid a format war similar to the recent long-running battle between the Blu-ray and HD-DVD platforms.

Sir Howard Stringer said Sony had to find new ways of capturing the imaginations of consumers, and that 3D television was “an exciting new area” where Sony could “lead the industry”. 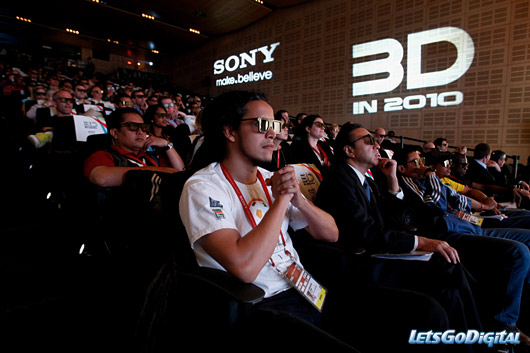